Dropped into this delightful church right in the heart of Mayfair. The church at Farm Street often gets a bit more attention, but I love this little number. The simple classical form of the building, a plain rectangular box with two tiers of arched windows in the side walls, at the east a shallow projection for the communion table and at the west a portico over the pavement and a short spire containing a clock and bell to call the faithful to worship It is said to be the mode 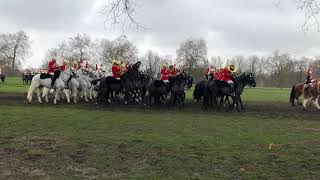 The annual inspection of the Queen's mounted bodyguard in advance of this summer of ceremonial duties and is a test of the regiment's ability to conduct state ceremonial duties for the year. The Household Cavalry Mounted Regiment is based in Hyde Park Barracks in Knightsbridge, London, and provides mounted ceremonial troops for all state occasions including State Visits, the Queen's Birthday Parade, the State Opening of Parliament and the Garter Ceremony. Pretty rainy condit

Went on a tour today of the parts of St Paul's that you don't usually get to see, which was very illuminating. We started off at the the Chapel of St Michael and St George, the spiritual home of the Order of St Michael and St George, founded in 1818 to honour people who have rendered important service overseas and to which Her Majesty the Queen attends from time to time. Next we climbed up the steps you take to get to the Whispering Gallery, but instead stopped off halfway u
bottom of page